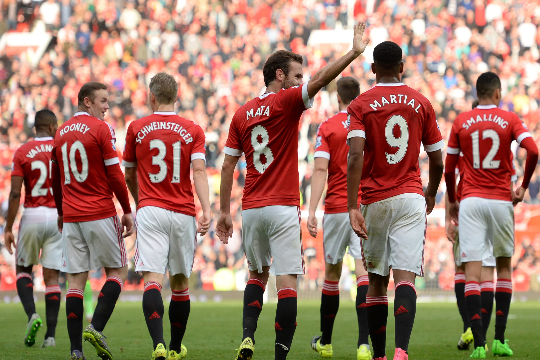 Manchester United have moved to the top of the English Premier League table, at the expense of their rivals, Manchester City. The Citizens started the day in first, and were in action in the day’s early kick-off at Tottenham. Kevin de Bruyne opened the scoring for the visitors 25 minutes in, but Eric Dier drilled home on the stroke of half time, before Toby Alderweireld nodded the home side in front early in the second half. Goals from Harry Kane and Eric Lamela then completed a remarkable turnaround for Spurs. That result meant that United knew a victory over Sunderland at Old Trafford would elevate them above their neighbours, and they duly delivered thanks to goals from Memphis Depay, Wayne Rooney and Juan Mata. Meanwhile, some of the pressure was lifted from Brendan Rodgers, as his Liverpool side secured a much-needed 3-2 win over struggling Aston Villa. Former Villian James Milner scored the Premier League’s quickest goal so far this season, firing home after just 66 seconds, before Daniel Sturridge doubled the Reds advantage on the hour mark with a sweetly-struck volley. Rudy Gestede then pulled one back for the visitors, but a minute later Sturridge restored Liverpool’s two-goal cushion, slotting home Philippe Coutinho’s clever flick, before Gestede pulled another one back for Villa. There was a seven-goal thriller at the King Power Stadium, with high-flying Leicester losing their unbeaten record to a rampant Arsenal. Jamie Vardy put the hosts ahead, before Theo Walott and Alexis Sanchez (3) put the Gunners in control. Vardy then gave the Foxes a glimmer of hope late on, but that was soon distinguished by substitute Olivier Giroud, who scored his team’s fifth in stoppage time. Jose Mourinho berated his Chelsea players, saying there were too many poor individual displays in their 2-2 draw at Newcastle. Ayoze Pérez gave the hosts a half-time lead, which was doubled on the hour by Georginio Wijnaldum, but Chelsea fought back to earn a point thanks to Ramires and Willian. Elsewhere, West Ham salvaged a 2-2 draw at home to Norwich thanks to Cheikhou Kouyate’s injury-time strike, Stoke beat Bournemouth 2-1 and Southampton were 3-1 winners over Swansea.