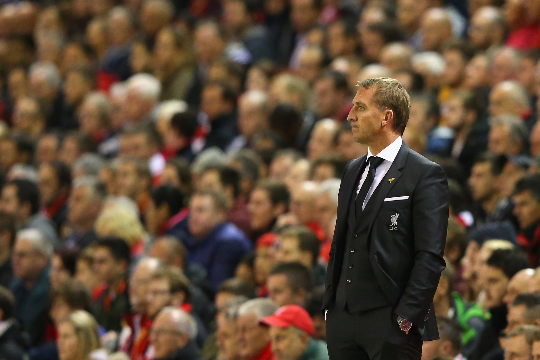 The spotlight will be on Brendan Rodgers at a restless Anfield, where Aston Villa are the visitors (18:00 kick-off, UAE time). The Reds boss had to field questions on his future during yesterday’s pre-match press conference, after a start to the season in which Liverpool have collected only eight points from their opening six games, scoring just four times. They also needed penalties to get past League Two Carlisle in their midweek League Cup tie. Villa have also struggled in the early weeks of the season, but will be boosted by their derby win over Birmingham on Tuesday, and by the fact that they’ve won two and drawn one in their last three visits to Anfield, and beat the Reds in last season’s FA Cup semi-final. Before then, the weekend’s EPL action gets under way with a mouth-watering tie at White Hart Lane, where Tottenham Hotspur welcome table-topping Manchester City (15:45). It’s the third home game in a week for Spurs, who beat Crystal Palace 1-0 in the EPL last Sunday, but then lost 2-1 to arch-rivals Arsenal in the League Cup on Wednesday. City, meanwhile, suffered a shock defeat to West Ham, ending their perfect league record, but then won 4-1 at Sunderland in midweek. Recent history is heavily weighted in the visitors favour, with wins in the last four league meetings, where they’ve scored 16 goals to Tottenham’s two. Elsewhere in today’s 18:00 games, high-flying Leicester host Arsenal, Swansea travel to Southampton, Stoke welcome Bournemouth, West Ham continue their Boleyn Ground farewell against Norwich, and Manchester United will expect to keep up the pressure on their neighbours at the top of the table, with bottom side Sunderland visiting Old Trafford. The late game (20:30) sees winless Newcastle, who were knocked out of the League Cup by Championship side Sheffield Wednesday in midweek, host the champions, Chelsea. Jose Mourinho’s men look to be getting into their stride after a slow start to the defence of their EPL title, but will be without Diego Costa, after the striker was given a three-game ban for violent conduct during last week’s 2-0 win over Arsenal.