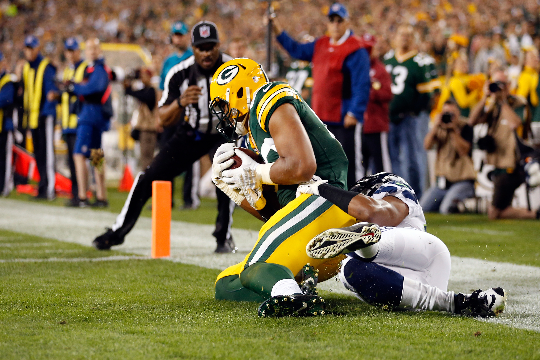 The Green Bay Packers inflicted a second loss in two games on the Seattle Seahawks, with a 27-17 win at Lambeau Field this morning. It was a rematch of last season’s NFC Championship game, which the Seahawks won, despite being 16-0 down. The Packers emerged victorious this time round, though, thanks to Aaron Rodgers, who threw for two touchdowns, Mason Crosby, who converted four field goals, and a defence which held firm under pressure at the end of the fourth quarter. The Packers move to 2-0, whilst it’s the first time since 2011 that the Seahawks have been 0-2. Meanwhile, the Dallas Cowboys beat the Philadelphia Eagles 20-10 to move to 2-0. However, their joy was tempered by an injury to quarterback, Tony Romo, who suffered a broken collarbone. Elsewhere, there were late wins for the Jacksonville Jaguars, who overcame their Florida rivals the Miami Dolphins 23-20 with a last minute field goal from Jason Myers, and the Oakland Raiders, who earned a 37-33 win over the Baltimore Ravens thanks to rookie Seth Roberts’ touchdown. On Saturday, Tom Brady threw three touchdown passes as the Super Bowl Champions, the New England Patriots, continued their winning streak with a 40-32 win over the Buffalo Bills. The New York Giants went to 0-2, losing 24-20 to the Atlanta Falcons, the Pittsburgh Steelers stormed to a 43-18 win over the San Francisco 49ers, whilst the Arizona Cardinals had the same margin of victory over the Chicago Bears (48-23). The New York Jets are at the Indianapolis Colts tonight.