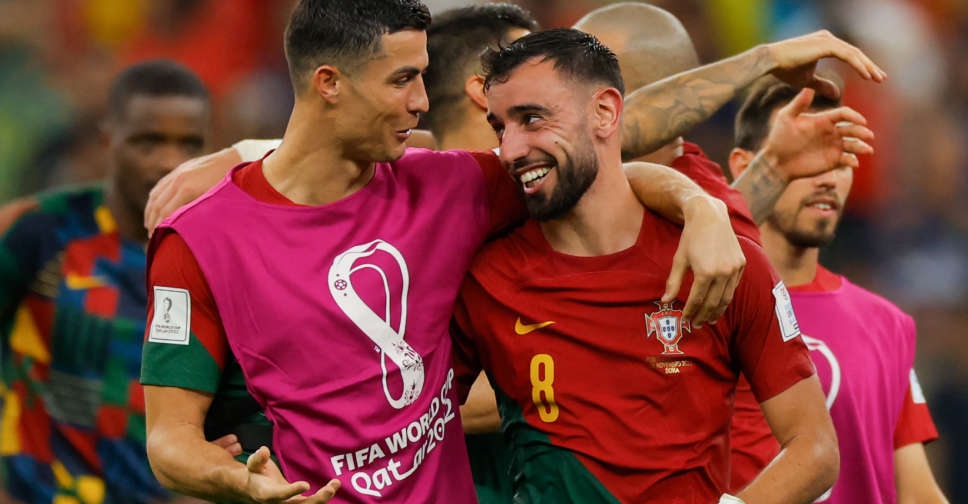 A second-half brace from a stunning Bruno Fernandes fired Portugal into the last 16 of the World Cup on Monday to join France and Brazil, after a 2-0 win that outclassed an uninspiring Uruguay given little chance to get into the match.

For Portugal whose World Cup narrative has so far been crafted by the controversy and brilliance of Cristiano Ronaldo, the night belonged to Fernandes, who shone throughout and always looked threatening.

His first goal set the tone of how the match would play out, with a 55th minute cross intended for Ronaldo that sailed fortuitously into the net, before a perfectly executed spot kick in stoppage time that guaranteed his side's passage to the knockout stages with a match remaining.

Ronaldo had celebrated the first goal ecstatically as his own and smiled awkwardly as it was announced as belonging to Fernandes, who twice came close to completing a hat-trick in the dying moments.

The win was the third time at a World Cup that Portugal have won two successive group stage matches, and the previous two times led to streaks into the semi-finals.

Fernandes played down talk of his starring role and said his focus was the next match against South Korea and getting a perfect nine points for Portugal.

"What's important is we were able to go on to the next round and very important was the win against a tough opponent," he said.

"Our objective is to think match after match and we have to do our best because we obviously want to win all the matches."

Uruguay, the dark horses in a succession of World Cups, looked nothing like the side that knocked Portugal out in the last 16 in Russia in 2018 and struggled to get into the match as the European side piled on pressure from the start and never relented.

Portugal had the lion's share of the possession and pressed continuously but laboured in the final third and lacked clear-cut scoring chances until the second half, in a game where Uruguay were scrappy, off kilter and lacking initiative.

The result leaves Uruguay with a difficult final match against Ghana, who kept themselves in contention by beating South Korea 3-2 in the earlier Group H match.

Ronaldo had a few flashes of flair that drew loud roars from the Lusail stadium crowd, including a moment three minutes in when he used his shoulder to redirect a long throw into the path of William Carvalho, whose powerful volley sailed over the bar.

Portugal were dangerous on the approach and controlled both flanks, with Bernardo Silva, Fernandes and an industrious Joao Felix combining well and each frustrated in their efforts to put Portugal ahead.

Uruguay had a few chances, with the best coming on 32 minutes from Rodrigo Bentancur, who ran half the length of the field and skipped past three defenders before his low shot was stooped by advancing keeper Diogo Costa.

Portugal battled hard and finally broke the deadlock nine minutes after the break when Fernandes' cross floated past Uruguayan goalkeeper Sergio Rochet, who was rooted to his line as Ronaldo rose to head home ball but fell short.

Uruguay rallied to try to get back into the match around the hour mark after coach Diego Alonso made a raft of substitutions to shake up his attack, with Facundo Pellistri making an instant impact, Luis Suarez coming close and Maxi Gomez blasting his shot into the post.

But the fightback was shortlived, with Portugal quickly regaining control and winning a penalty at the end after a handball in the box that required a VAR review.

Fernandes coolly converted his penalty in stoppage time and scrambled to get a third, with his effort saved at the near post by Rochet and a strike in the dying seconds that cannoned agonisingly off the post.

Portugal coach Fernando Santos commended his team's professionalism in a performance he described as brilliant.

"We clearly showed we are a very strong unit, both in the quality of the game and in the bond between them," Santos said.

"That's how positive things are achieved. We will always work like this."