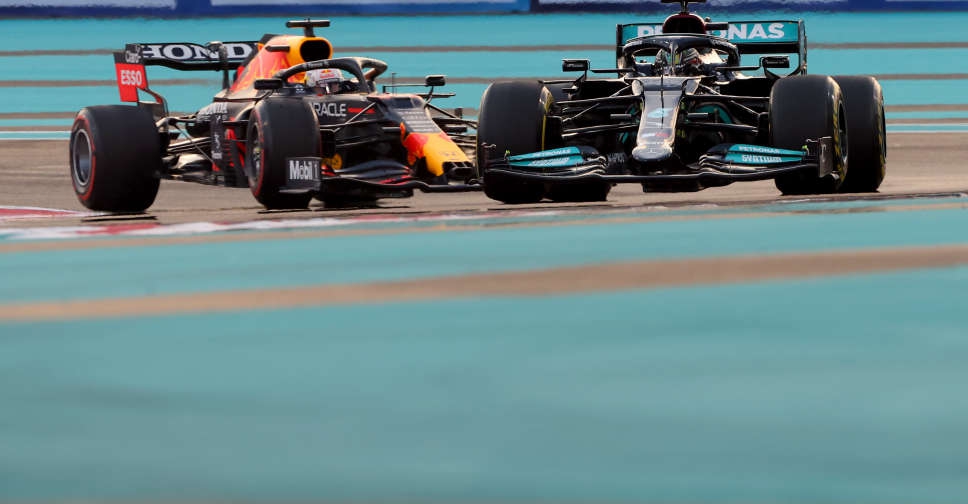 Formula One's title decider in Abu Dhabi hit immediate controversy on Sunday when Lewis Hamilton and Max Verstappen almost collided on the opening lap, with the Mercedes driver pushed wide and cutting a corner to keep the lead.

Seven-times world champion Hamilton had taken the lead from the start with Red Bull's Verstappen slow off the mark from pole position but making a move on the inside into turn seven.

The two drivers are level on points with Verstappen ahead 9-8 on race wins.

Verstappen was quick on the radio to tell his team that Hamilton needed to give the place back while the Briton told Mercedes he had been pushed off track.

Stewards decided no investigation was necessary, with race director Michael Masi saying Hamilton had slowed enough to give back the time advantage gained.

"That's incredible. What are they doing here?," said Verstappen when informed.

Red Bull team boss Christian Horner told Sky Sports television from the pitwall that there was "a total lack of consistency" in the stewards' decision and his team now had to "do it the hard way".

His team manager Jonathan Wheatley continued the debate with Masi, saying Verstappen had done everything right and he did not understand the logic.

"Jonathan, the stewards have reviewed it and determined that all of the lasting advantage was gained and that Max forced that position there. They have said they have review it and are not investigating."

Jenson Button, the 2009 world champion, said he was also struggling to understand the regulations.

"Obviously, in Brazil there was no penalty, but they both drove off the circuit. Max stayed on the track this time," said the Briton, referring to a similar incident at Interlagos last month.

Hamilton's former team mate Nico Rosberg agreed: "Max was a little bit too lungy and too aggressive, forcing Lewis out too strongly, even though he had a right to the corner there," said the German.

"Then I would also say Lewis didn't give back everything that he gained."