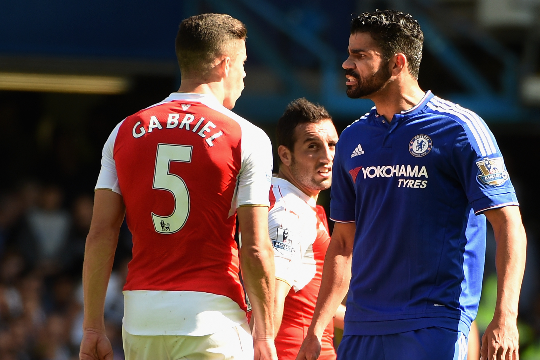 Chelsea kick-started their English Premier League (EPL) season with a 2-0 victory over Arsenal at Stamford Bridge, in a scrappy game, which saw the Gunners reduced to nine men. Gabriel was given a straight red card at the end of the first half after a confrontation with Diego Costa, who could perhaps consider himself lucky not to go for an early bath himself after catching Laurent Koscielny with a flailing arm. Santi Cazorla was then sent off in the second half, after receiving a second yellow card. Goals from Kurt Zouma, who nodded in Cesc Fabregas’ cross, and Eden Hazard, whose shot deflected in off Callum Chambers, secured the Blues their first home win of the season. Meanwhile, Manchester City’s perfect start to the campaign came to an end at the hand of West Ham, who added to their victories at Arsenal and Liverpool with a 2-1 over the league leaders. Goals from Victor Moses and Diafra Sakho put the Hammers in command, before Kevin de Bruyne pulled one back for the Citizens. Leicester City pulled off their second comeback in a week, recovering from two goals down at Stoke. Bojan marked his return from a long lay-off to give the hosts the lead, which Jonathan Walters soon doubled. But a penalty from Riyad Mahrez and a strike from Jamie Vardy meant the points were shared. It was also a-point-apiece for Swansea and Everton, after a goalless draw at the Liberty stadium, while Bournemouth claimed their second win of the season, with early goals from Callum Wilson and Matt Ritchie sending Sunderland home empty handed. Elsewhere, there were away-wins for West Brom, who overcame Aston Villa thanks to a solitary Saido Berahino strike, and Watford, who heaped yet more misery on bottom-of-the-table Newcastle, winning 2-1 at St James’ Park.