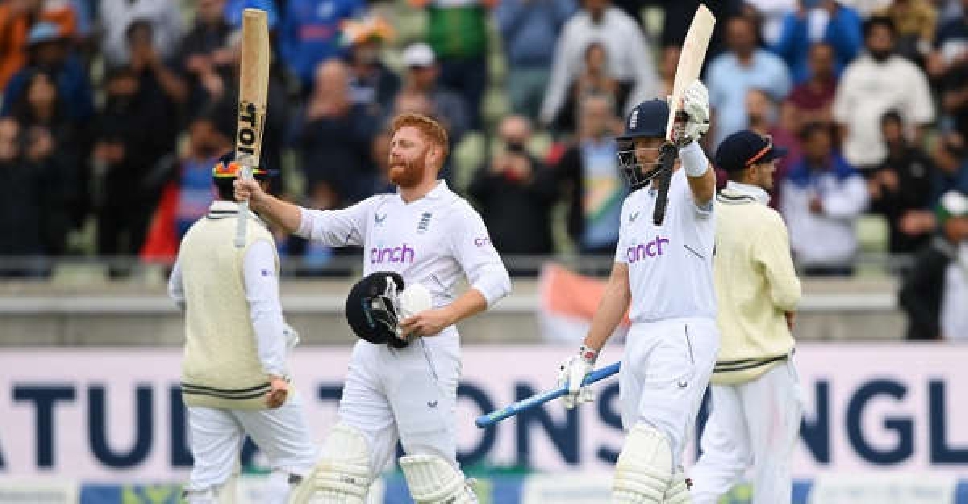 Joe Root and Jonny Bairstow smashed unbeaten hundreds to pull off England's record chase of 378 against India for a series-levelling seven-wicket victory on Tuesday in the re-arranged fifth test.

The hosts went into the final day at Edgbaston needing 119 while India, who held a 2-1 lead going into the contest, needed seven wickets.

Overnight batsmen Root and Bairstow sealed victory in the first session, exhibiting an attacking brand of cricket which is quickly becoming the hallmark of the test team under new coach Brendon McCullum and captain Ben Stokes.

India's faint victory hopes hinged on getting early breakthroughs but their seamers could neither separate the Yorkshire duo nor could they stem the boundary flow.

Root was so much at home on a pitch with variable bounce that he treated Shardul Thakur like a spinner -- stepping out against the seam bowler and playing a reverse-scoop against him that went for a six.

Bairstow brought up his second hundred of the match with a tight single before celebrating it with three consecutive boundaries off Mohammed Siraj.

"Just two lads from Yorkshire, grown up playing together from academy to test matches, it's pretty special," Bairstow, adjudged man-of-the-match for his fourth hundred in five innings, said of his epic unbroken stand of 269 with Root. England's previous highest successful run chase came in 2019 when they reached a 359-run target in an Ashes test against Australia.

Tuesday's victory follows England's home win against New Zealand when they chased down targets of 277, 299 and 296 to blank the world champions 3-0.

The outcome was far from what India had envisaged after dominating the first three days and securing a handy first-innings lead of 132. They managed 245 in the second innings and their attack looked somewhat jaded.

Leading the side in the absence of Rohit Sharma, who had tested COVID-19 positive before the match, seamer Jasprit Bumrah sought solace in being part of a see-saw contest.

"This is the beauty of test cricket," he said, "Even if you have three good days, you have to keep coming and keep up the good performance."

Bumrah will also find consolation in being part of a test record. Bowling to him, England's Stuart Broad conceded 35 runs in one over on Saturday, the most expensive in test history.

The five-match series could not be completed last year following COVID-19 cases in the India camp ahead of the final match at Old Trafford.