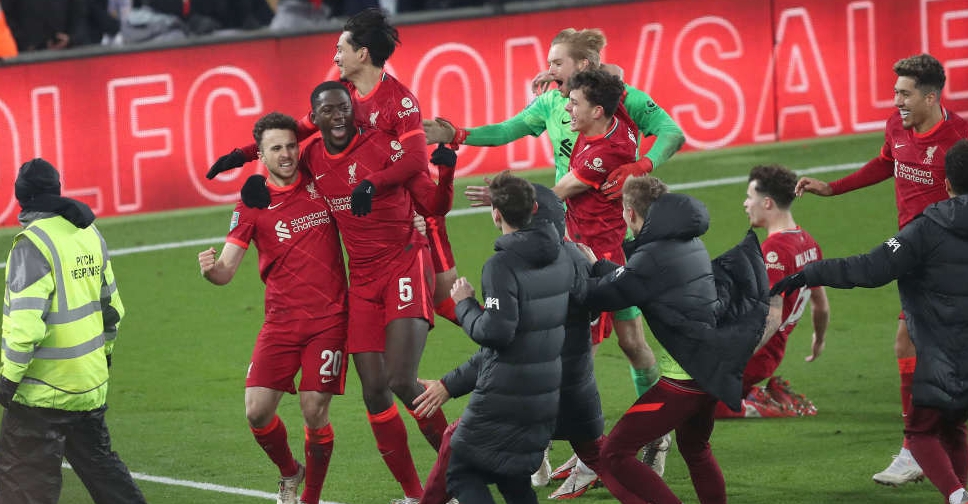 A much-changed Chelsea side featuring three teenaged debutants beat Brentford 2-0 on Wednesday to reach the League Cup semi-finals where they will face London rivals Tottenham Hotspur.

An own goal 10 minutes from time by Pontus Jansson broke the deadlock at Brentford before a Jorginho penalty sealed victory for Thomas Tuchel's COVID-hit side.

In a thriller at Anfield, a weakened Liverpool side came back from the brink to beat Leicester City on penalties after a 3-3 draw, setting up a semi-final against Arsenal.

Jamie Vardy's early double gave Leicester a 2-0 lead and James Maddison's rocket shot made it 3-1 after Alex Oxlade-Chamberlain had pulled a goal back.

But Diogo Jota struck in the 68th minute before Takumi Minamino levelled in the sixth minute of stoppage time.

Minamino then spurned a chance to send Liverpool through in the ensuing penalty shoot-out as he blazed his effort over the bar.

But the Reds' keeper Caoimhin Kelleher then saved Ryan Bertrand's effort, his second save of the shoot-out, before Jota converted to win it for Liverpool.

Antonio Conte's Tottenham, runners-up to Manchester City last season, made it through to the semis with a 2-1 home win against West Ham United -- all the goals arriving in a five-minute spell in the first half.

Steven Bergwijn slotted in from Pierre-Emile Hojbjerg's cut back for his first goal of the season but West Ham levelled through Jarrod Bowen's well-taken goal.

Bergwijn then set up Lucas Moura for the winner.

Chelsea made eight changes to the side that drew 0-0 with Wolverhampton Wanderers at the weekend with manager Tuchel handing debuts to academy players Harvey Vale, Jude Soonsup-Bell and Xavier Simons.

Liverpool made 10 changes to the side that started the 2-2 draw with Tottenham on Sunday with only Tyler Morton remaining.

And when Vardy scored twice inside the opening 13 minutes it seemed Juergen Klopp's side were on the way out.

But Minamino sent the tie to penalties with a superbly-taken goal and stand-in keeper Kelleher proved the hero with two saves to break Leicester's hearts.

The semi-finals are scheduled for two legs in January, although Klopp says in the current circumstances he would prefer just one game.

"I think it would be better with one game, absolutely, but obviously what I say is not too important, so if there are two games then we play two games," he said.