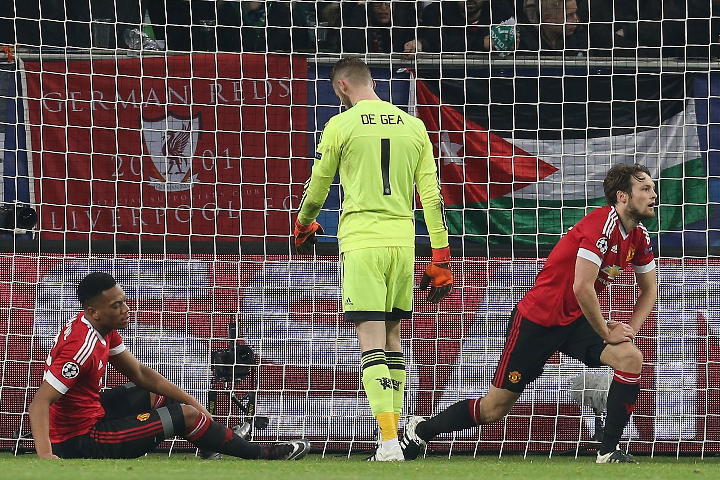 Manchester United are out of the Champions League after a 3-2 loss in Wolfsburg. Louis van Gaal’s men needed to match PSV’s result to guarantee their place in the knockout stages, and were doing so with eight minutes remaining, when they levelled matters with their German opponents thanks to an own goal, and the Dutch champions were all-square against CSKA Moscow. However, just two minutes later, Ronaldo Naldo got his second for the hosts, whilst at the same time Davy Propper put PSV 2-1 up, to secure second spot in Group B. It was a better night for United’s local rivals, Manchester City, who finished top of Group D after a 4-2 win over Borussia Monchengladbach. The Citizens leapfrogged Juventus, who lost 1-0 at Sevilla, to ensure they’re seeded in the last-16. Elsewhere, Atletico Madrid finished first in Group C following a 2-1 defeat of previous leaders Benfica. In the group’s other game, Galatasaray confirmed their spot in the Europa League with a 1-1 draw against Astana. Meanwhile in Group A, the already-qualified Real Madrid and PSG both ended the stage with wins. Cristiano Ronaldo scored four, Karim Benzema a hat-trick, and Mateo Kovacic one in Madrid’s 8-0 demolition of Malmo, whilst Lucas Moura and Zlatan Ibrahimovic got on the score-sheet in PSG’s 2-0 win over Shakhtar.