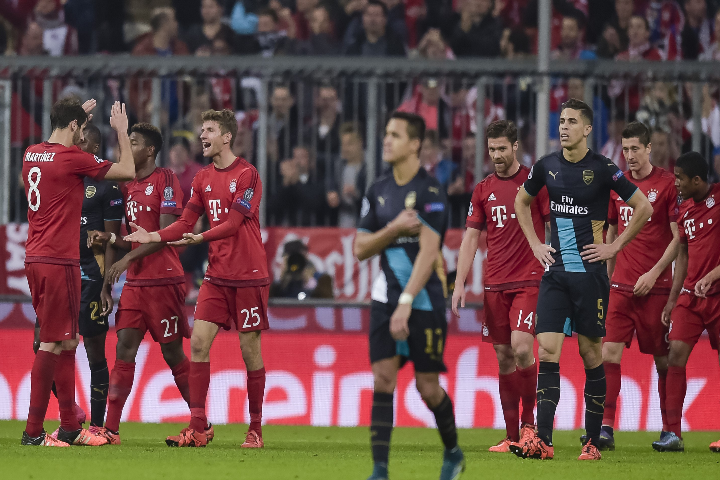 Arsenal’s hopes of qualifying for the last 16 of the Champions League hang by a thread, after they were demolished 5-1 at Bayern Munich. The German champions raced to a three-goal lead by half-time thanks to goals from Robert Lewandowski, Thomas Muller and David Alaba. Arjen Robben then added a fourth, before Olivier Giroud got a consolation for the Gunners. Muller then got Bayern’s fifth in the last minute. The result leaves Arsene Wenger’s men bottom of Group F with two games remaining, six points off second-place Olympiakos, who beat Dinamo Zagreb 2-1. It was a better night for Arsenal’s London rivals, Chelsea, who lifted the pressure on boss Jose Mourinho with a 2-1 win over Dynamo Kiev at Stamford Bridge. An own goal from Aleksandar Dragovic put the hosts ahead after 34 minutes, but he then made up for that by getting the equaliser with a little over ten minutes remaining. However, an excellent free-kick from Willian late-on gave Chelsea a crucial three points. They’re now second in Group G, two points clear of Kiev, and three adrift of Porto, who won 3-1 at Maccabi.In Group E, Barcelona eased to a 3-0 win over BATE Borisov thanks to goals from Neymar (2) and Luis Suarez, whilst Roma won a five-goal thriller against Bayer Leverkusen. Mohamed Salah set the Stadio Olimpico alight early on, putting the hosts ahead after just two minutes, before Edin Dzeko doubled their lead on the half-hour mark. Leverkusen then responded with two goals, from Admir Mehmedi and Javier Hernandez, in the opening five minutes of the second-half. However, an 80th minutes penalty from Miralem Pjanic gave the Giallorossi the win, taking them above the German’s into second place. Elsewhere, Zenit St Petersburg booked their place in the knockout phase after recording an impressive 2-0 win in Lyon, whilst Valencia suffered a surprise 1-0 loss at Gent.