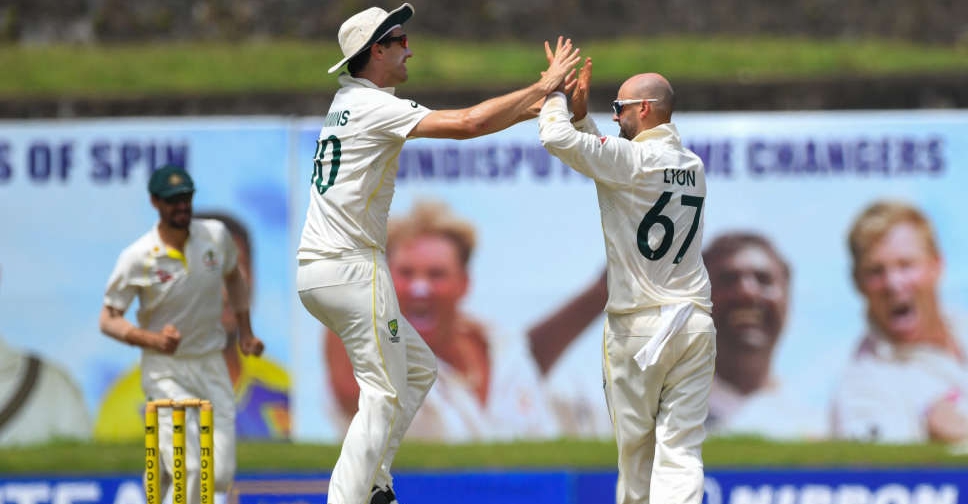 Nathan Lyon and part-time spinner Travis Head wrecked Sri Lanka on a treacherous track to help Australia to a 10-wicket win inside three days of the opening test in Galle on Friday.

The tourists were in the box seat once they carved out a first innings lead of 109 in the spin-dominated, low-scoring contest at the Galle International Stadium.

Lyon (4-31) combined with spin partner Mitchell Swepson (2-34) to mow down Sri Lanka's top order and Head polished off their tail to skittle out Sri Lanka for 113 in their second innings.

Opener David Warner needed four balls to seal the win, smashing a six off Ramesh Mendis to bring up the victory.

Skipper Dimuth Karunaratne's 23 was the highest tally on Sri Lanka's sorry-looking scorecard, with all 10 batsmen dismissed by the spinners.

Lyon finished with a match haul of nine wickets but Cameron Green was named man of the match for his score of 77.

Australia captain Pat Cummins was pleased that they mastered difficult conditions to fashion "an amazing win".

"Turning up this morning I didn't think it was going to happen that fast," he said.

"We were really clear in our planning how everyone was going to go about it."

"I thought the bravery and the proactiveness shown, especially by our batters, was fantastic."

Earlier, Australia had added eight runs to their overnight score before losing their last two wickets and being bowled out for 318.

Sri Lanka gave an early indication of how they wanted to bat in their second innings, when their openers milked 17 runs from the opening over off Mitchell Starc.

That approach was fraught with risks and when Cummins introduced spin from both ends after three overs, Sri Lanka's batting order simply caved in.

Karunaratne fell after his attempted sweep against Lyon resulted in a bottom-edge, while opening partner Pathum Nissanka (14) completely missed the ball trying to play the same shot against Swepson.

Head, who had gone 26 tests without a wicket, also got the ball to turn viciously as he dismissed Dinesh Chandimal and Dhananjaya de Silva in his first over.

He struck twice in his third over, too, as Sri Lanka were bundled out in 22.5 overs - their shortest ever completed test innings.

Sri Lanka were without veteran batsman Angelo Mathews who tested positive for COVID-19 on Thursday and was substituted by Oshada Fernando in the second innings.

Karunaratne was particularly unhappy with the way Sri Lanka batted in home conditions.

"We've been playing in these conditions, we knew it's going to turn, but the decisions we took were horrible," he said.

"Batting in the second innings was not easy, especially against Lyon who was turning the ball heavily. We just wanted to put pressure on him," he said of their ultra-aggressive approach.

Galle also hosts the second and final test from July 8.