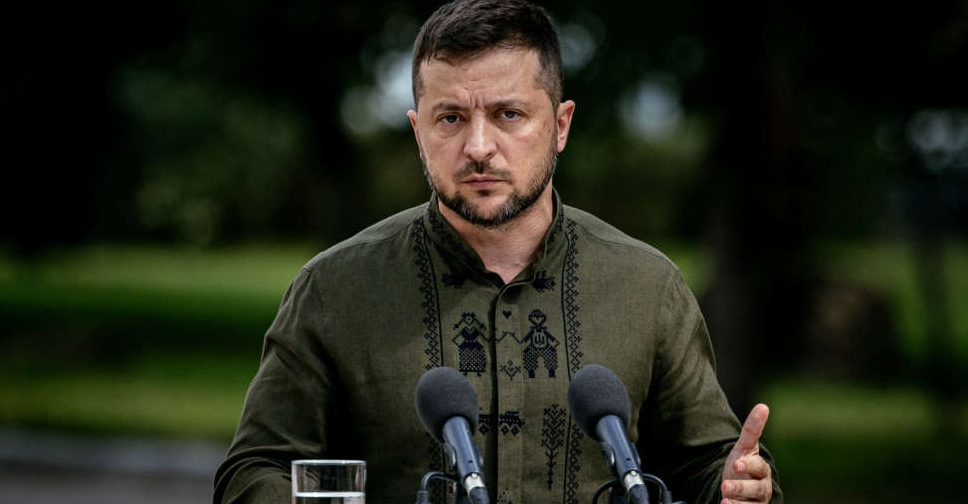 Ukrainian President Volodymyr Zelenskiy said the world narrowly avoided a radiation disaster as electricity to Zaporizhzhia nuclear power plant was cut for hours due to Russian shelling in the area, allegations that Moscow denied.

Zelenskiy said Russian shelling on Thursday sparked fires in the ash pits of a nearby coal power station that disconnected the reactor complex, Europe's largest such facility, from the power grid.

Back-up diesel generators ensured power supply that is vital for cooling and safety systems at the plant, he said, praising the Ukrainian technicians who operate the plant under the gaze of the Russian military.

"If our station staff had not reacted after the blackout, then we would have already been forced to overcome the consequences of a radiation accident," he said in an evening address.

"Russia has put Ukraine and all Europeans in a situation one step away from a radiation disaster."

Vladimir Rogov, a Russian-appointed official in the occupied town of Enerhodar near the plant, blamed Ukraine's armed forces for a fire in a forest near the plant. He said towns in the area lost power for several hours on Thursday.

"This was caused by the disconnection of power lines from the Zaporizhzhia nuclear power station as a result of provocations by Zelenskiy's fighters," Rogov wrote on Telegram. "The disconnection itself was triggered by a fire and short circuit on the power lines."

Ukrainian state nuclear company Energoatom said it had been the first complete disconnection in the plant, which has become a hotspot in the six-month-old war.

Russia invaded Ukraine in February, captured the plant in March and has controlled it since, although Ukrainian technicians still operate it.

The United Nations is seeking access to the plant and has called for the area to be demilitarised. International Atomic Energy Agency (IAEA) officials are "very, very close" to being able to visit Zaporizhzhia, agency Director-General Rafael Grossi said on Thursday.

Russia and Ukraine have accused each other of shelling the site, fuelling fears of a nuclear disaster.

Nuclear experts have warned of the risk of damage to the plant's spent nuclear fuel pools or its reactors. Cuts in power needed to cool the pools could cause a disastrous meltdown.

Paul Bracken, a national security expert and professor at the Yale School of Management, said the concern was that artillery shells or missiles could puncture the reactor walls and spread radiation around potentially a large area, much like the 1986 accident involving the Chornobyl reactor.

A failure at the Zaporizhzhia plant could "kill hundreds or thousands of people, and damage environmentally a far larger area reaching into Europe," Bracken said.

"Russian Roulette is a good metaphor because the Russians are spinning the chamber of the revolver, threatening to blow out the brains of the reactor all over Europe," Bracken said.

Russia's ground campaign has stalled in recent months after its troops were repelled from the capital Kyiv in the early weeks of the invasion, but fighting continues along the frontlines to the south and east.

Russian forces control a swathe of territory along Ukraine's Black Sea and Sea of Azov coasts, while the conflict has settled into a war of attrition in the eastern Donbas region.

The Russian Defence Ministry said an Iskander missile hit a military train at Chaplyne station that was to deliver arms to Ukrainian forces in the eastern Donbas region.

Ukrainian officials said civilians were killed when a house and the station were hit and five train carriages went up in flames.

Moscow denies targeting civilians and Reuters was unable independently to verify the reports.

The Ukrainian military on Friday said its air force launched strikes on areas of troop and weapon concentration in two different sites.

The report came a day after Russia's defence ministry said Russian forces had destroyed eight Ukrainian warplanes in strikes at air bases in the Poltava and Dnipropetrovsk regions. That would be one of the heaviest losses for Ukraine's air force in recent weeks.

In the Donbas region, Russia's TASS news agency reported Ukrainian forces using a US-supplied HIMARS multiple rocket launcher targeted the town of Stakhanov, with about 10 rockets hitting the town before dawn on Friday, according to officials from the pro-Moscow breakaway statelet of Luhansk.

In its morning roundup of battlefield developments from around the country on Friday, the Ukraine military also said its forces had repulsed Russian assaults on the towns of Bakhmut and Soledar in the Donetsk region.

Zelenskiy spoke on Thursday by phone with US President Joe Biden, who reiterated US support for Ukraine against Russia, the White House said.

Potentially giving additional credence to Western estimates of heavy Russian losses during the war, President Vladimir Putin signed a decree on Thursday increasing the size of Russia's armed forces to 2.04 million from 1.9 million.