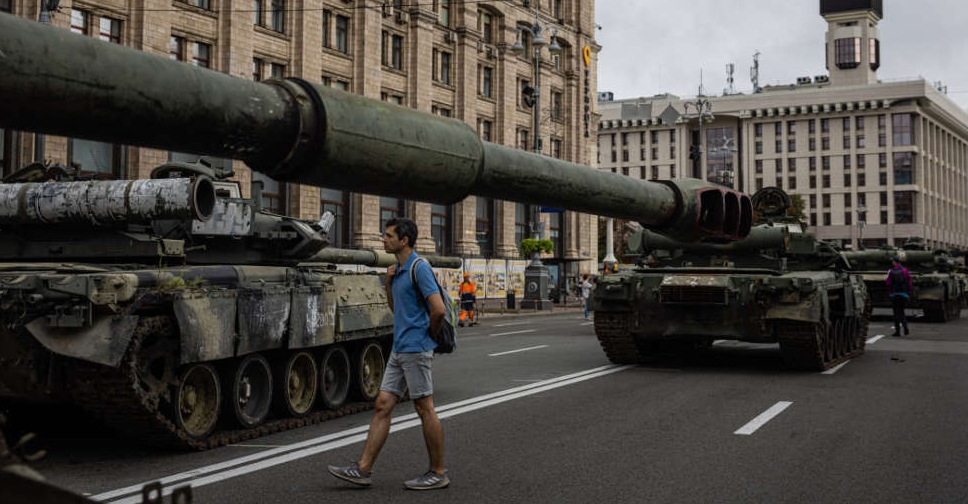 Ukraine's capital Kyiv banned public celebrations this week to commemorate independence from Russian-dominated Soviet rule, citing a heightened threat of Russian attack in a war that the United Nations said on Monday has killed more than 5,500 civilians.

Near frontlines in the south of the country, Ukraine said Russia fired rockets into several southern Ukrainian towns north and west of Europe's largest nuclear power plant, captured by Russian forces shortly after they invaded Ukraine in February.

Artillery and rocket fire in the region of the Zaporizhzhia nuclear reactor complex, on the Russian-occupied south bank of the Dnipro River, has stirred fears of a nuclear disaster and led to calls for the surrounding area to be demilitarised.

Russia launched what it calls a "special military operation" on February 24 to demilitarise its smaller neighbour and protect Russian-speaking communities. Ukraine and its Western backers accuse Moscow of waging an imperial-style war of conquest.

Ukrainian President Volodymyr Zelenskiy warned at the weekend of the risk of more severe attacks ahead of Ukraine's 31st anniversary on Wednesday of independence from Russian-dominated Soviet rule.

Local authorities in Kyiv have banned large public events, rallies and other gatherings related to the anniversary from Monday until Thursday due to the possibility of rocket attacks, according to a document published by the Kyiv military administration and signed by its head Mykola Zhyrnov.

Kyiv is far from front lines and has only rarely been hit by Russian missiles since Ukrainian defenders repelled a Russian ground offensive to seize the capital in March.

In Kharkiv, a northeastern city that has come under frequent and deadly longer-range artillery and rocket fire, Mayor Ihor Terekhov announced an extension to an overnight curfew to run from 4:00 pm to 7:00 am effective from Tuesday to Thursday.

In the port of Mykolaiv near Russian-held territory to the south, regional governor Vitaliy Kim said authorities planned a precautionary order for residents to work from home on Tuesday and Wednesday and urged people not to gather in large groups.

Zelenskiy, in a weekend video address, said Moscow could try "something particularly ugly" in the run-up to Wednesday, which also marks half a year since Russia invaded.

The Office of the UN High Commissioner for Human Rights, citing its monitoring mission in Ukraine, said on Monday 5,587 civilians had been killed and 7,890 injured as of August 21, mainly from artillery, rocket and missile attacks.

Russia has not said how many of its soldiers have been killed. Ukraine's General Staff have estimated the Russian military death toll at 45,400.

Reuters has been unable to verify the military losses by either side.

Ukraine and Russia have traded blame for repeated incidents of shelling in and around the premises of the Zaporizhzhia nuclear reactor complex, on the Russian-occupied south bank of the Dnipro River, in recent weeks.

Kyiv has accused Moscow of basing troops and storing military hardware on the grounds of the power station and using it as a shield from which to bombard Kyiv government-controlled territory to the west and north. Russia denies this and accuses Ukraine of targeting the plant with shells and drones.

Overnight on Monday, Russian forces fired rockets into Nikopol, just across the Dnipro from the plant on its south bank, as well as the Krivyi Rih and Synelnykovskyi districts further out to the northwest and northeast respectively, regional Governor Valentyn Reznichenko wrote on Telegram.

The conflict, Europe's biggest since World War Two, has destroyed towns and cities, killed thousands of people, forced millions to flee abroad and deepened a volatile geopolitical stand-off between Russia and the West.

Since Russian forces retreated in disarray from Kyiv early in the war, they have concentrated on seizing the rest of the eastern Donbas region partially held by separatist proxies since 2014, and holding on to captured swathes of the south.

In the latest sign of a planned Ukrainian counter-offensive to retake the Russian-occupied Kherson region in the south, smoke was rising from the sole bridge across the Dnipro in Kherson city, a Kyiv interior ministry adviser said.

A source in occupied Kherson's emergency services told Russia's Interfax news agency that the Antonivskyi bridge was hit by high-precision HIMARS rockets supplied to Ukraine by the United States, and that 15 people had been injured.

The bridge, a key means of Russian military transport in the region, has been repeatedly targeted by Ukrainian forces.

Reuters was not able to independently verify the battlefield reports of either side.