Protesters take over Bangkok streets in new show of defiance 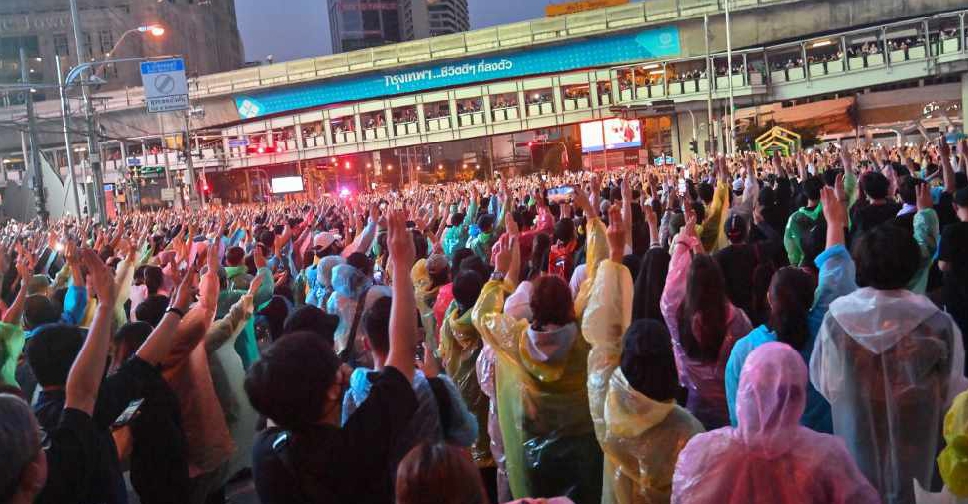 Thousands of Thai anti-government protesters took over key intersections in Bangkok on Sunday, defying a ban on protests for the fourth day.

Demonstrations have persisted despite the arrest of dozens of protesters and their leaders, the use of water cannon and shutdowns on much of Bangkok's metro rail system in a bid to quell over three months of street action.

"Free our friends", the protesters called out as they stood in a rain, a mass of colourful ponchos and umbrellas. Some held up pictures of detained protest leaders. Thai Lawyers for Human Rights said at least 80 protesters had been arrested since October 13 with 27 still being held.

Police have given no full breakdown. They made no immediate steps to intervene as protesters took over Victory Monument and Asok, two of Bangkok's most important transport hubs.

Police said there were around 10,000 people at Victory Monument alone.

"We are committed to maintain peace and order. In order to do so we are bound by laws, international standards, human rights." police spokesman Kissana Phathanacharoen told a news conference.

Demonstrators nonetheless distributed helmets and goggles to protect them during any attempt to disperse them by force.

Protesters say Prime Minister Prayuth Chan-ocha engineered last year's election to keep the power he seized in a 2014 coup - an accusation he denies.

The demonstrations have also become more openly critical of King Maha Vajiralongkorn's monarchy, breaking a longstanding taboo, demanding curbs to its powers despite potential jail terms of up 15 years for anyone insulting the king.

During demonstrations by tens of thousands of people at multiple points across Bangkok on Saturday, protesters painted a flag on the road with "Republic of Thailand" written across it. The writing was painted out overnight.

The Royal Palace has made no comment on the protests.

The government banned demonstrations in Bangkok on Thursday.

Across Thailand, demonstrations were being organised in at least 19 other provinces on Sunday. Solidarity protests were also being held or planned in Taiwan, Denmark, Sweden, France, the United States and Canada.