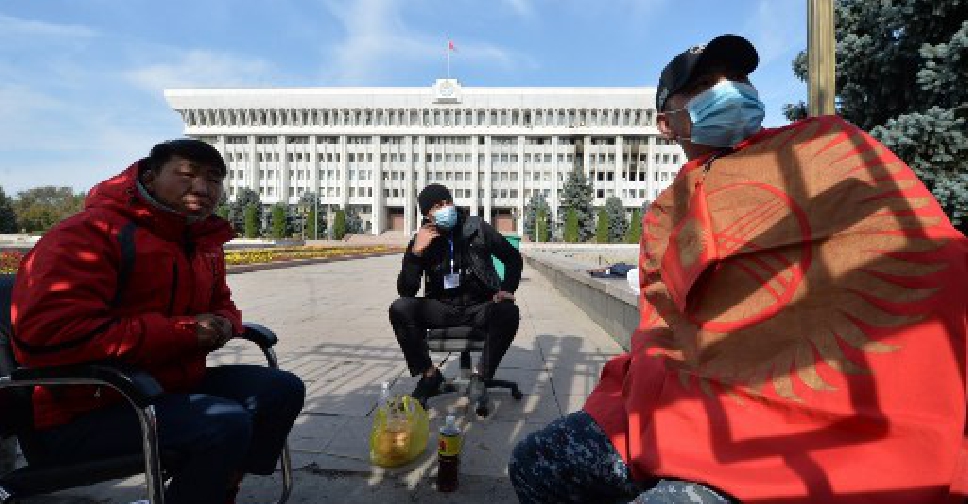 Members of the voluntary people's wearing a Kyrgyz flag guard the yard of the main government building, known as the White House in Bishkek, on October 8, 2020. VYACHESLAV OSELEDKO / AFP

Kyrgyz President Sooronbai Jeenbekov declared a state of emergency in the capital Bishkek on Friday and ordered troops to deploy, as supporters of rival political groups took to the streets after days of unrest following an overturned election.

A Reuters journalist in the capital heard gunshots and saw demonstrators from rival groups throwing rocks and bottles at each other and scuffling.

Jeenbekov's office said in a statement the state of emergency, which includes a curfew and tight security restrictions, would be in effect from 8 pm on Friday until 8 am on October 21.

His order did not say how many troops would be deployed but they were instructed to use military vehicles, set up checkpoints, and prevent armed clashes.

Earlier the president had said he was ready to resign once a new cabinet was appointed.

The country has seen a power vacuum, with opposition groups quarrelling among themselves since seizing government buildings and forcing the cancellation of results from Sunday's parliamentary election.

Two leading opposition figures reached an agreement to join forces on Friday, and won the backing of Jeenbekov's predecessor as president, Almazbek Atambayev.

But their followers and followers of other groups held rival rallies, which politicians said posed a danger of violence.

Russia has described the situation in Kyrgyzstan, which borders China and hosts a Russian military base, as "a mess and chaos".

The crisis tests the Kremlin's power to shape politics in its former Soviet sphere of influence, at a time when fighting has erupted between Armenia and Azerbaijan, and Belarus is also engulfed in protests.

The opposition is divided between 11 parties which represent clan interests in a country that has already seen two presidents toppled by popular revolts since 2005.

Rival candidates for the premiership Omurbek Babanov and Tilek Toktogaziyev joined forces on Friday, with Toktogaziyev agreeing to serve as Babanov's deputy. They were backed by four parties, local news website 24.kz reported.

They were joined at a rally in Bishkek by the former president Atambayev. Followers chanted "I am not afraid" and "Kyrgyzstan" to the rhythmic beating of large drums.

However, followers of another candidate, Sadyr Zhaparov, staged a rival demonstration only a short distance away.

Several other opposition parties had yet to make their positions clear.

Jeenbekov's allies swept Sunday's parliamentary vote in the official results that have now been discarded. They have kept a low profile as the opposition parties have taken to the streets. Western observers said the election was marred by credible allegations of vote-buying.

So far, veteran officials who supported the revolt have been in control of the security forces. On Friday, self-appointed provisional heads of the interior ministry and the state security service left their respective buildings and handed over the leadership to their deputies. The two state bodies said the move was meant to ensure security forces remained apolitical.