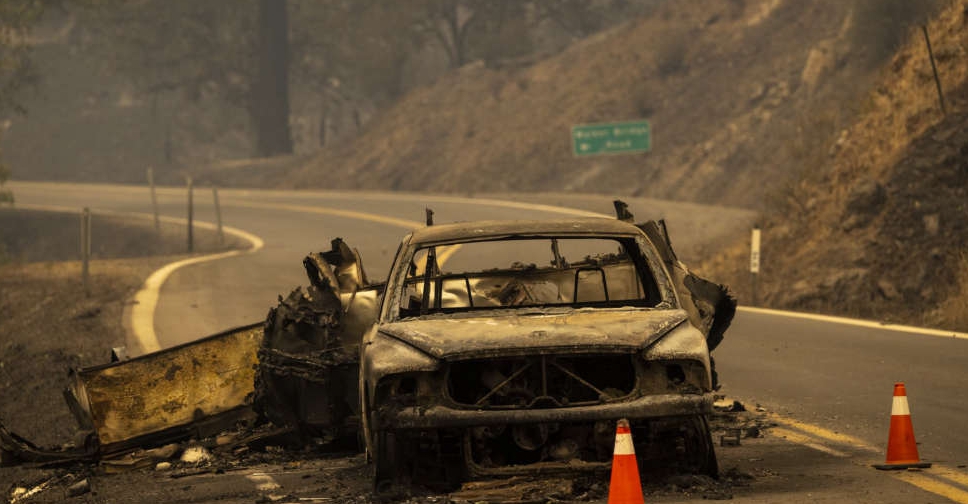 Two bodies were found inside a burned-out car in the path of a huge northern California forest fire raging near the Oregon border, authorities said on Monday, as crews battling the blaze for a fourth day took advantage of rainfall in the area.

Since erupting on Friday, the fast-moving McKinney Fire has forced some 2,000 residents to flee while destroying homes and critical infrastructure, mostly in Siskiyou County, home to the Klamath National Forest, according to a statement from Governor Gavin Newsom on Sunday.

Authorities have yet to quantify the extent of property losses, but the California Department of Forestry and Fire Protection, or Cal Fire, said in an update posted on Monday that more than 4,900 homes were threatened by flames.

Already the largest blaze in California this year, the fire has charred 55,493 acres of drought-stressed timber and remained at 0 per cent containment, Cal Fire reported.

Two smaller wildfires in the same county that scorched just over 2,700 acres combined as of Monday and had chased at least 200 residents from their homes, Cal Fire said.

The cause of the blaze was under investigation. But the fire erupted amid record-breaking heat in a region where desiccated trees and undergrowth already had created a highly combustible fuel bed.

Prolonged drought and unusually warm weather have stoked increasingly frequent and extreme wildfire behaviour in California and elsewhere across the Western United States in recent years, a pattern scientists say is symptomatic of human-induced climate change.

Firefighting crews took advantage of a low-pressure weather system that brought rain to much of the fire zone on Sunday evening and continued to douse the region on Monday, helping to tamp down the blaze, US Forest Service officials said.

But the same weather system also carried the potential for thunderstorms, and with it erratic winds and lightning strikes that could ignite new blazes.

In the meantime, crews focused much of their work carving fire containment lines along the Klamath River corridor to create a protective buffer near the towns of Yreka and Fort Jones, Freeman said.

A layer of heavy smoke trapped close to the ground by low pressure, a phenomenon called an "inversion layer," also stunted fire growth since Sunday evening, though reduced visibility curbed firefighting aircraft operations, according to the Forest Service.

Newsom on Sunday declared a state of emergency for Siskiyou County, a sparsely populated area larger than the state of Connecticut, hastening the availability of government disaster response and relief.