Armenia says it is ready to work for Nagorno-Karabakh ceasefire 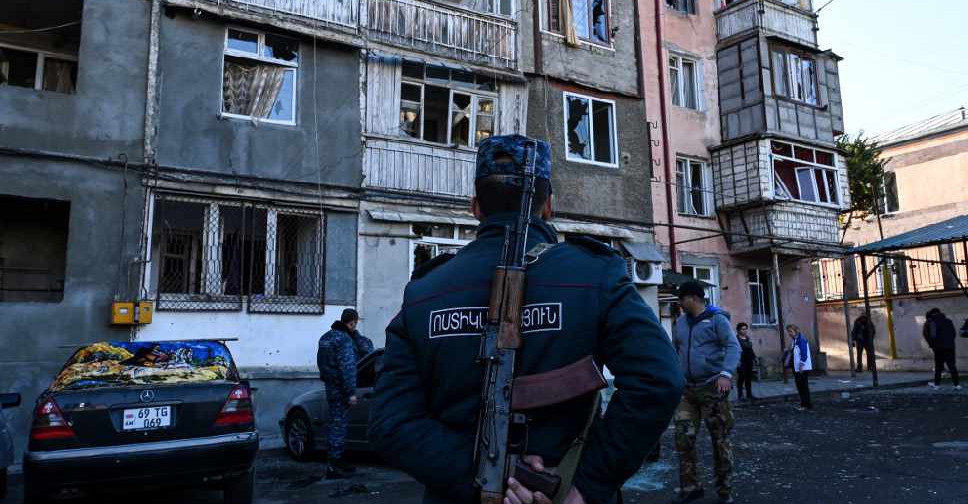 Armenia said it would work with Russia, the US and France on renewing a ceasefire in Nagorno-Karabakh as the death toll rose on the sixth day of fighting over the breakaway enclave.

Azerbaijan, which is fighting ethnic Armenian forces in Nagorno-Karabakh, has not responded to a call for a ceasefire on Thursday by the three countries - co-chairs of the Organisation for Security and Co-operation in Europe (OSCE) Minsk Group, which mediates in the crisis.

Azerbaijan's president, Ilham Aliyev, ruled out talks with Armenia over Nagorno-Karabakh on Tuesday, and Azerbaijan's ally Turkey said on Thursday the three big powers should have no role in peacemaking.

"It is obvious that Armenia is not interested in resolving the conflict through negotiations and is trying to annex the occupied territories," Azerbaijan's Foreign Ministry said.

French President Emmanuel Macron said in a statement he had spoken on the phone successively with the prime minister of Armenia, Nikol Pashinyan, and Azerbaijan's Aliyev, and had proposed a new method to restart talks within the Minsk group.

Macron said work would start from Friday evening, as he upped his efforts to broker mediation in his role as co-chair of the OSCE Minsk group.

The Armenian government said Pashinyan and Macron agreed that any use of foreign fighters and terrorists in the conflict was unacceptable, and Macron called for an immediate ceasefire.

Armenia and Azerbaijan accuse each other of using foreign mercenaries in military operations.

In a third phone call in the six days since fighting broke out, Putin and Pashinyan expressed serious concern about the involvement of what the Kremlin termed illegal armed groups from the Middle East in the fighting.

Putin reiterated the need for an immediate ceasefire.

The senior U.S. diplomat for the region, Philip Reeker, will travel to Turkey, a NATO ally, on Saturday for talks on the situation in the Caucasus and other issues, the State Department said on Friday.

More fighting was reported overnight and throughout Friday. Nagorno-Karabakh's defence ministry reported 55 new military casualties, taking the death toll among its forces to 147.