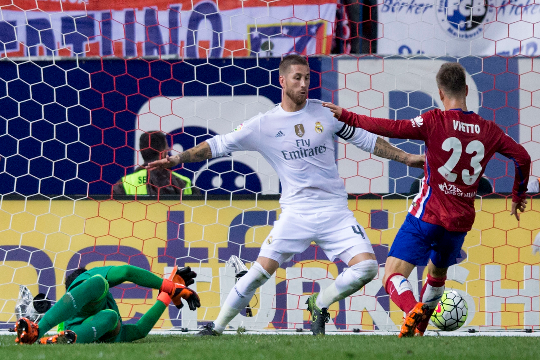 Luciano Vietto picked an opportune moment to score his first goal for Atletico Madrid, finishing from close range to give his new side a draw against local rivals Real Madrid. The striker finished from close range to cancel out Karim Benzema’s opener, and save the blushes of Antoine Griezmann, who saw his penalty saved. The result moves Madrid up to second in La Liga, within one point of leaders Villareal, who lost 1-0 at Levante, whilst Atleti stay in fifth. In Germany, Bayern Munich romped to a 5-1 win over Borussia Dortmund in the Der Klassiker. Thomas Muller scored twice in the first half, including one from the spot, to give the hosts a 2-1 half-time lead, with Aubameyang netting for the visitors. Robert Lewandowski then continued his remarkable run of form in front of goal, scoring twice to take his tally to 12 goals in his last four games, before Mario Gotze rounded off the emphatic win to leave Munich seven points clear of Dortmund at the top of the Bundesliga. Le Classique in France was a tighter affair, as Paris Saint Germain edged out Marseille 2-1, thanks to two penalities from Zlatan Ibrahimovic. The visitors took the lead in the 30th minute after Michy Batshuayi's header, but ten minutes later Ibrahimovic was brought down by Marseille ‘keeper Steve Mandana for the first pen, then saw his header handled three minutes afterwards for his second. As well as extending his sides lead at the top of Ligue 1 to five points, the Swedes goals also meant he became the clubs record scorer, with his tally of 110 taking him past Pauleta. In Italy, Fiorentina’s convincing 3-0 win over Atalanta sent them two points clear of Inter at the top of Serie A, after the Nerazzuri drew 1-1 at Sampdoria. Juventus continued their recovery from a shocking start to the campaign with a 3-1 win against Bologna, whilst AC Milan crashed to a 4-0 loss at home to Napoli. Elsewhere in Europe, Dutch champions PSV Eindhoven ended Ajax’s unbeaten start to the season with a 2-1 win in Amsterdam.