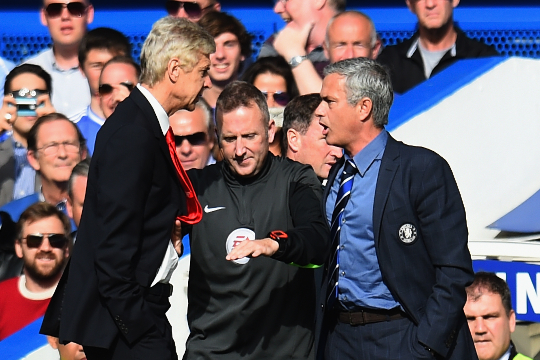 Matchday six of the EPL season kicks off with a clash of the titans as the champions, Chelsea, host their London rivals, Arsenal in the early kick-off (15:45 UAE time). Gunner’s boss, Arsene Wenger, ended a dreadful run of 13 games without a win over Jose Mourinho in last month’s Community Shield, and should be confident of adding to that 1-0 win considering both sides starts to the season. The Blues currently lie just a single place above the relegation zone in 17th after losing three of their first five games, winning one and drawing the other, whilst the Gunners are in fourth, having collected 10 points so far. However, it was Chelsea who had the better time of it in the Champions League in midweek, with a 4-0 win over Maccabi Tel Aviv at Stamford Bridge, while Arsenal lost 2-1 at Dinamo Zagreb. The fact that Mourinho’s men had a home game and Wenger & co. didn’t return to London until the early hours of Thursday could also significantly benefit the hosts. Elsewhere today, there’s a Midlands derby as West Brom make the short journey to Villa Park. Both teams have struggled so far this season, with just one win apiece, but if their recent meetings are anything to go by, this should be an exciting game. There were goals aplenty in last season’s EPL games between the two sides, with a 2-2 draw at the Hawthorns followed by a thrilling 4-3 home win for Villa, who were also 2-0 winners over the Baggies in the FA Cup quarter-final. The days other 18:00 (UAE time) kick-offs see bottom-of-the-table Newcastle welcome Watford to St. James’ Park , unbeaten Leicester travel to Stoke, Bournemouth host winless Sunderland, and Everton make the trip to south Wales to face Swansea. Meanwhile, in the days late kick-off, league leaders Manchester City host West Ham United at the Etihad. On paper, this should be a straightforward home win, but the Hammers have already been to the Emirates and Anfield so far this season – and taken six points without conceding a goal, beating Arsenal 2-0 and Liverpool 3-0. However, City, with their 100% record, should be a different proposition, and will could be a wounded animal after their midweek loss to Juventus in the Champions League.