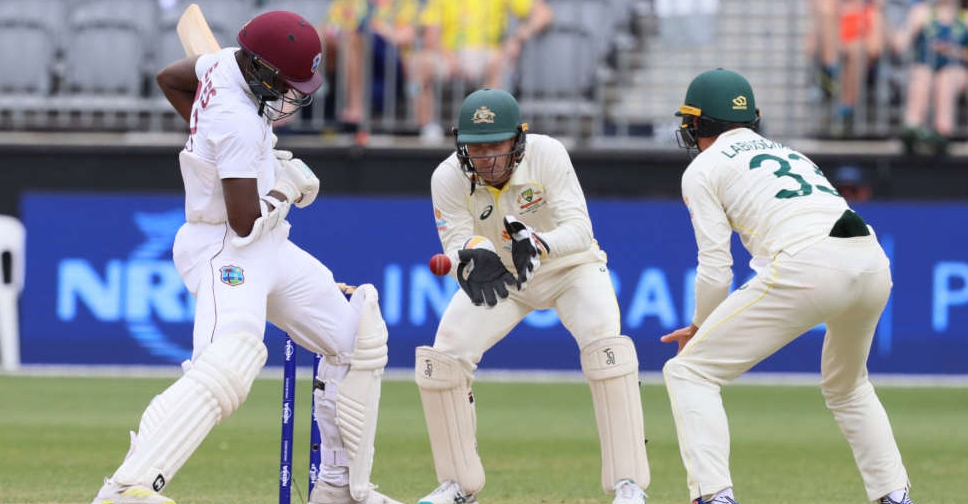 Australia claimed a thumping 164-run win against the West Indies in the first test at Perth Stadium.

The hosts bowled the Caribbean side out for 333 on Sunday in the second session of day five to clinch the win and and a 1-0 lead in the two-match series.

Resuming on 192-3 with a 306-run deficit, the West Indies hopes of batting out the final day were dashed when off-spinner Nathan Lyon (6-128) drew early blood.

The visitors, after reaching 283 in their first innings, were comprehensively outplayed by Australia, who controlled the entire match with declarations of 598-4 and 182-2 driven by run machine Marnus Labuschagne's efforts of 204 and 104 not out.

"The way that the batters set up the game was relentless," said Australia captain Pat Cummins. Marnus "is amazing isn't he, he's just got a huge appetite for runs."

The top-ranked test team were short a bowler as Cummins, who laboured in the field, elected not to bowl due to quad soreness.

"I was going to have a bowl, but lucky it didn't get too close," he said.

Lyon shouldered a heavy workload and had Kyle Mayers caught early on 10 before clipping Kraigg Brathwaite's off stump, sending the skipper packing for a defiant 110.

Stiff and sore from an unbeaten 200 in the first innings, Steve Smith was made to fly in the slips to catch Jason Holder (3), who edged part-time spinner Travis Head (2-25).

Happy to take Lyon on, Roston Chase (55) and Alzarri Joseph (43) compiled an entertaining 82-run partnership, but once the resistance was broken by Head the hosts wasted no time in cleaning up the tail.

"Obviously I'm disappointed we lost but I must commend the batters for the fight they showed," said Brathwaite.

Meagre crowds plagued the red-ball season opener, which Cricket Australia scheduled to start on a Wednesday, as fatigued fans tuned out after three months of limited overs matches.

The series concludes in Adelaide on Thursday with a day-night test.