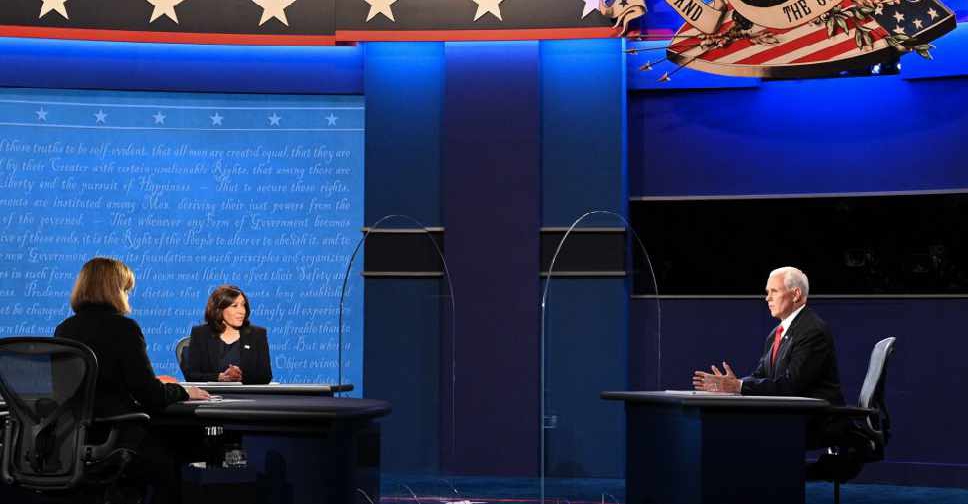 Vice-President Mike Pence and Democratic challenger Kamala Harris clashed over the Trump administration's handling of the coronavirus pandemic during their debate on Wednesday, as the White House struggled to contain an outbreak that has infected President Donald Trump and dozens of others.

The policy-heavy, relatively sedate debate stood in stark contrast to last week's chaotic presidential showdown between Trump and Democratic presidential nominee Joe Biden, which was marred by Trump's constant interruptions and personal insults from both men.

Trump's COVID-19 diagnosis, along with his age and that of Biden, added weight to the debate, as both Pence, 61, and Harris, 55, sought to demonstrate they were capable of assuming the office if needed. Either the Republican Trump, 74, or Biden, 77, would be the oldest U.S president to be sworn into office if victorious in November.

But Wednesday's confrontation seemed unlikely to alter the dynamics of a race that opinion polls show Biden is winning with less than four weeks to the Nov. 3 election, as both candidates evaded certain questions, stuck to talking points and avoided major gaffes.

Harris, the California U.S. senator and former state attorney general, immediately went after Trump's record on the pandemic that has claimed 210,000 American lives and devastated the economy.

"The American people have witnessed what is the greatest failure of any presidential administration in the history of our country," Harris said as the debate began at the University of Utah in Salt Lake City.

In response, Pence blamed China for the pandemic and touted the U.S. administration's efforts to battle the disease, including Trump's decision in late January to restrict travel from the pandemic's epicenter in China.

"I want the American people to know that from the very first day, President Donald Trump has put the health of America first," he said. "China is to blame for the coronavirus, and President Trump is not happy about it," he added.

The two candidates were separated by 3.6 metres and Plexiglas shields, a reminder of the virus that has led to the largest public health crisis in a century.

Harris, who was on the biggest stage of her political career, is the daughter of immigrants from Jamaica and India and the first person of Asian descent on a major-party presidential ticket, as well as the first Black woman.

Pence, a former conservative radio host, is a former U.S. congressman and Indiana governor who has steadfastly defended Trump during his tumultuous presidency.

In addition to competing for November's election, the two candidates were also jockeying for long-term position in their respective parties. Both are widely seen as future presidential candidates, whatever the outcome of November's contest.

It was the only vice-presidential debate of the campaign. Biden and Trump are due for rematches on October 15 and 22.