North Korea puts hazmat suits on parade for national day, but no missiles 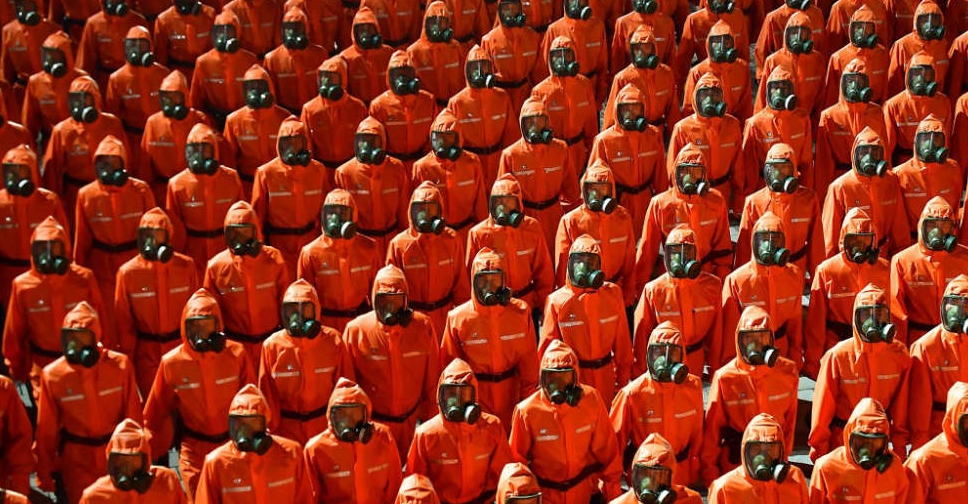 North Korea celebrated the 73rd anniversary of its foundation with a nighttime military parade in the capital, state media reported on Thursday, publishing photographs of marching rows of personnel in orange hazmat suits but no ballistic missiles.

Some conventional weapons were also on display, including multiple rocket launchers and tractors carrying anti-tank missiles.

But no ballistic missiles were seen or mentioned in the reports, and Kim did not deliver any speech, unlike last October when he boasted of the country's nuclear capabilities and showcased previously unseen intercontinental ballistic missiles during a pre-dawn military parade.

"The columns of emergency epidemic prevention and the Ministry of Public Health were full of patriotic enthusiasm to display the advantages of the socialist system all over the world, while firmly protecting the security of the country and its people from the worldwide pandemic," the KCNA said.

North Korea has not confirmed any COVID-19 cases, but closed borders and imposed strict prevention measures, seeing the pandemic as a matter of national survival.

It was the first time since 2013 that North Korea staged a parade with the 5.7 million strong Worker-Peasant Red Guards, launched as reserve forces after the exit of Chinese forces who fought for the North in the 1950-53 Korean War.

Yang Moo-jin, a professor at the University of North Korean Studies in Seoul, said the perceived absence of strategic weapons and the focus on public security forces showed Kim is focused on domestic issues such as COVID-19 and the economy.

"The parade seems to be strictly designed as a domestic festival aimed at promoting national unity and solidarity of the regime," Yang said.

"There were no nuclear weapons and Kim didn't give a message while being there, which could be meant to keep the event low-key and leave room for manoeuvre for future talks with the United States and South Korea."

Talks aimed at persuading North Korea to give up its nuclear weapons and ballistic missile arsenals have stalled since 2019.

US President Joe Biden's administration has said it will explore diplomacy to achieve North Korean denuclearisation, but has shown no willingness to meet North Korean demands for an easing of sanctions.

A reactivation of inter-Korean hotlines in July raised hopes for a restart of the denuclearisation talks. But the North stopped answering the calls as South Korea and the United States held their annual military exercises last month, which Pyongyang has warned could trigger a security crisis.