Mexico urges Haitians at US-Mexico border to give up 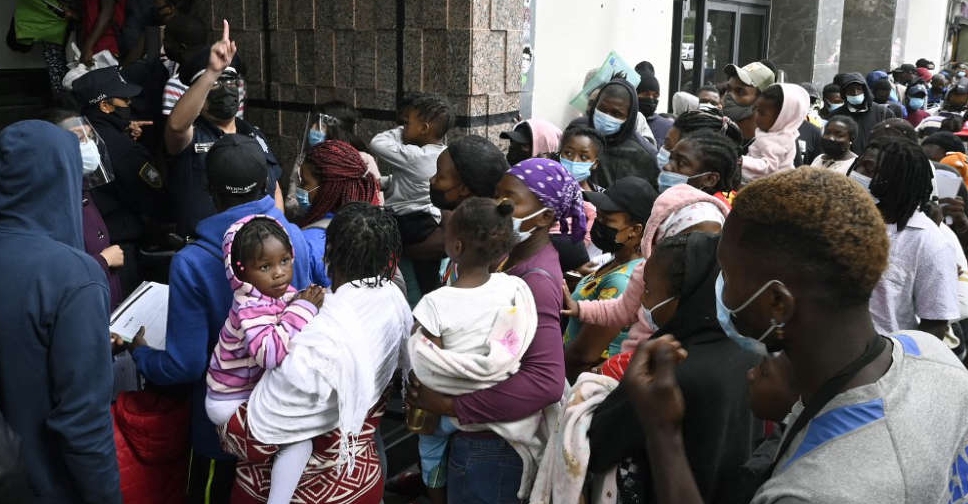 Haitian migrants wait to enter the offices of National Commission for Refugees (COMAR) to ask for asylum in Mexico, in Mexico City on September 23, 2021. ALFREDO ESTRELLA / AFP

Mexican officials are urging Haitians on the Texas border trying to reach the United States to give up and return to Mexico's frontier with Guatemala to request asylum.

Up to 14,000 mostly Haitians were camped just north of the Rio Grande river this month as they attempted to enter the United States, but hundreds retreated to Mexico after U.S. officials began sending planes of people back to Haiti.

On Thursday, the U.S. special envoy to Haiti quit in protest over the Biden administration's deportations of migrants to the Caribbean nation, which has been rocked by the assassination of its president, gang violence and natural disasters.

That followed widespread outrage stirred up by images of a U.S. border guard on horseback unfurling a whip-like cord against at Haitian migrants near their camp.

Yet pressure is also growing on U.S. President Joe Biden to tighten the border, and Mexico's National Migration Institute (INM) is starting to return migrants to the southern Mexican city of Tapachula so they can file asylum applications there.

"We're not taking them out of the country," INM chief Francisco Garduno told Reuters. "We're bringing them away from the border so there are no hygiene and overcrowding problems."

Haitians who made the perilous, costly journey from Guatemala to Ciudad Acuna on the Mexico-U.S. border are skeptical about the merits of going back to a city where they had already unsuccessfully tried to process asylum claims.

Willy Jean, who spent two fruitless months in Tapachula, said if Mexico really wanted to help the migrants, it should allow them to make their applications elsewhere.

"Tapachula's really tough, really small, there's lots of people," he told an INM agent trying to persuade him to go south. "There's no work, there's nothing."

The United States has returned nearly 2,000 migrants to Haiti from the camp at Del Rio, Texas opposite Ciudad Acuna, and taken close to 4,000 people into custody, the Department of Homeland Security (DHS) said late on Thursday.

The Del Rio area, which includes the camp where families have crammed into makeshift shelters made of reeds on the banks of the Rio Grande, now holds some 3,000 people, DHS said.

Mexican official data show Haitians are already far less likely to have asylum claims approved in Mexico compared with many nationalities, even if their chances are starting to improve.

Last year, of all asylum claims that were formally resolved, only 22% of Haitian cases won approval, compared with 98% for Venezuelans, 85% of Hondurans, 83% of Salvadorans and 44% of Cubans. So far this year, the Haitian number is up to 31%.

Asylum requests have overwhelmed Mexico's Commission for Refugee Assistance (COMAR), which is scheduling appointments months away, if at all. Some Haitians in Ciudad Acuna said they had left Tapachula because they were so fed up with waiting.

"It basically pushes Haitians out," said Caitlyn Yates, a migration expert at the University of British Columbia.

Soggy papers discarded in the grass near the Rio Grande showed that a Haitian man who applied for a humanitarian visa in August would have had to wait until December for an appointment.

Telling migrants eyeing the U.S. side of the border that it would be better to process claims before the media disappeared from Del Rio and Ciudad Acuna, INM agents swept through the camp on Thursday beseeching them to go back to Tapachula.

"We're giving you this option," INM official Montserrat Saldana told a cluster of migrants circled around her. "All of you who cross the river are going straight to Haiti."