Britney Spears in engaged!  Brit shared the news on Instagram with her guy Sam Asghari. She’s flashing a huge diamond.  He asks if she likes it…she does.   It’s a 4 carat diamond set on a band with the word “Lioness” engraved into it - that’s Sam’s nickname for Britney.  Britney and Sam have been together for five years.  He’s 27, she’s 39.  It would be her third marriage, his first.

The MTV Video music Awards were in person this year, a far cry from the virtual show we got last year - and thank God, because if this year had been virtual, we wouldn’t have things like Machine Gun Kelly and Conor McGregor getting into a fight.  Okay, fight might be an overstatement. There was a bit of a scuffle when MGK’s security tried to hold Conor off when he was approaching the rapper to say hello.  Apparently MGK wasn’t interested, so security held the MMA fighter back, spilling the drink he was holding, which he threw toward MGK and Megan Fox who was nearby.  Conor says he just wanted a picture, and doesn’t understand what the big deal was and was surprised how he was treated.
Later on stage, MGK and Travis Barker were introduced to perform by their girlfriends Megan and Kourtney Kardashian.  Megan called them their future baby daddies.  They both already have three kids.
Travis Scott raised some eyebrows when he accepted Best Hip Hop Video for “Franchise,” a when he thanked his Mom, Stormi, and…not Kylie Jenner, whom he’s expecting another baby with.

Billie Eilish made news for a couple of reasons..first, because when Jennifer Lopez came out to give the first award, the whole Barclay Center went nuts, but she seemed unfazed.

Also, Billie’s video for “Your Power” won the VMA for Video for Good, an award that recognizes music that has a social message. Billie seemed genuinely happy to win an award, a bit of a departure from previous award ceremonies where she seems surprised that anyone would recognize her for her art.
People are talking about a moment on the red carpet where the interviewer was a little too brutally honest with Lil Nas X about his outfit choice.
Host Doja Cat had lots of different outfit changes, but this one with huge chicken feet stole the show:

And finally, check out Miley Cyrus covering Metallica's "Nothing Else Matters" with Metallica: 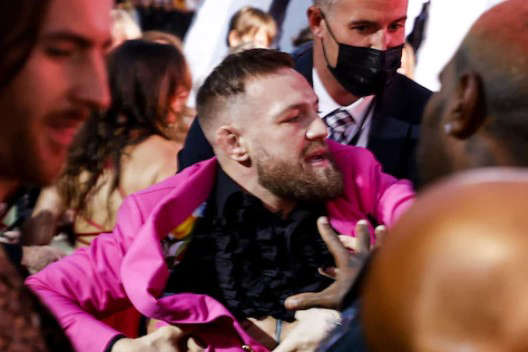