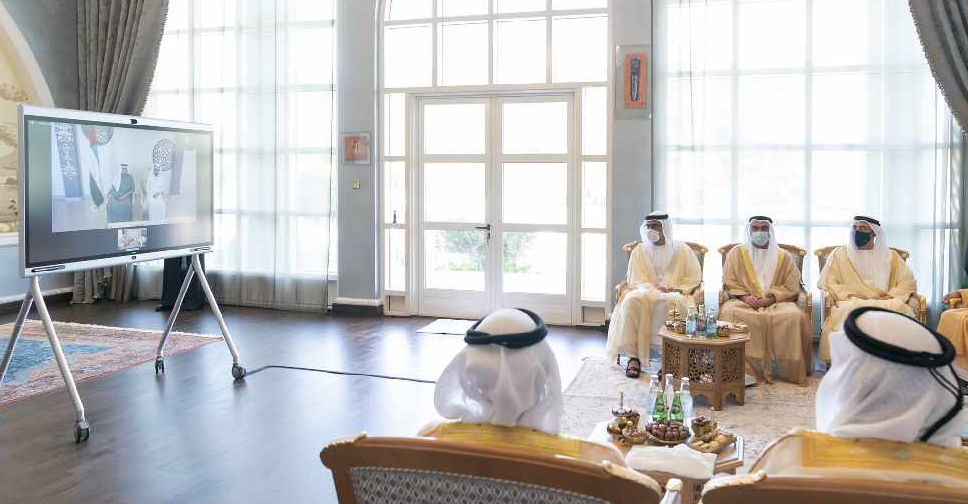 The people of the UAE have been reminded of the importance of social precautions during the COVID-19 pandemic by the nation's leaders as they attended a royal wedding via a group video call.

They sent their best wishes to Sheikh Mohammed bin Sultan bin Khalifa Al Nahyan, on his wedding to the daughter of His Highness Sheikh Tahnoun bin Zayed Al Nahyan.

Rulers from other emirates including Ajman and Ras Al Khaimah, along with dozens of senior dignitaries, also sent their congratulations via video calls.

"I congratulate all Al Nahyan family on this wedding. Your joy is a joy for the whole country. Our country is steadily and happily moving forward and as His Highness Sheikh Mohamed bin Zayed said, we are prepared for all challenges," Sheikh Mohammed said.

Their Royal Highnesses expressed their appreciation of hosting a simple ceremony, given the current circumstances and renewed calls for cooperation with the authorities as they work to contain the spread of the virus.

Sheikh Mohammed bin Rashid and Sheikh Mohamed bin Zayed engaged in cordial talks about the issues of concern to the country and emphasised that the UAE is capable of overcoming all of the challenges posed by the global pandemic.