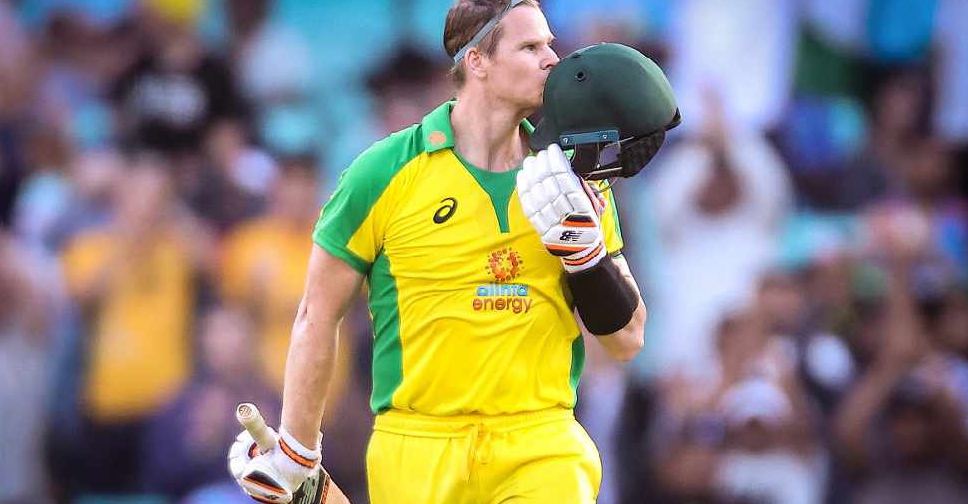 Steve Smith and Aaron Finch led the way with centuries as Australia opened their home summer with a one-day victory over India by 66 runs on Friday in the first men's international played in front of a crowd since March.

The capacity of the Sydney Cricket Ground was reduced by 50 per cent because of social distancing rules but a crowd of 17,821, mostly backing the tourists, were treated to some fireworks from the home batsmen in the afternoon sun.

Finch scored 114 in an opening stand of 156 with David Warner (69) to lay a platform before his predecessor as captain Smith smashed 105 off 66 balls to drive Australia to 374 for six -- their highest total against India.

India, who were forced to spend two weeks in quarantine on arrival in Australia, always looked like struggling to chase down the third highest tally they had conceded in any one-dayer.

Hardik Pandya thumped four sixes in a bright 90 to give them hope but the innings petered out after his fifth-wicket partnership of 128 with opener Shikhar Dhawan (74) was broken and India limped to 308-8 in their 50 overs.

"I've been searching for something for a couple of months but a few days ago something just clicked," Smith said of his batting. "It was nice to contribute to a good win."

The teams lined up in a "Barefoot Circle" in recognition of indigenous Australians before the match and moments of silence remembered Dean Jones, who died last month, and Phillip Hughes, who suffered a fatal injury at the ground exactly six years ago.

There was another short pause early in the Australia innings when two environmental protesters ran on the field but Finch and Warner were soon back pillaging runs again.

Smith survived an early scare on 15 when he was given out lbw but he immediately reviewed and the tracker showed the ball was going a whisker above the stumps.

Thereafter, Smith looked at his very best as he raced to the third fastest one-day century by an Australian in 62 balls, clubbing 10 fours and four sixes.

Finch had already secured his 17th century in the format from a more pedestrian 117 deliveries before departing to make way for a vintage Glenn Maxwell cameo of 45 runs off 19 balls.

Paceman Mohammed Shami was the pick of India's bowlers (3-59) and skittled Smith with a full toss in the final over of the innings.

Josh Hazlewood (3-55) stalled a blistering start to India's innings by removing Mayank Agarwal and then dismissed Virat Kohli (21) and Shreyas Iyer in the 10th over.

Spinner Adam Zampa (4-54) redeemed himself with ball in hand after dropping Kohli in the deep when the India captain was on one, but his was only one of a string of misfields from both sides.

India play two more one-dayers in Sydney and Canberra before a three-match Twenty20 series and four tests around the new year.

"I think we had enough preparation so no excuses," said Kohli. "The key to keeping the batsmen in check is picking up wickets and we couldn't do that."