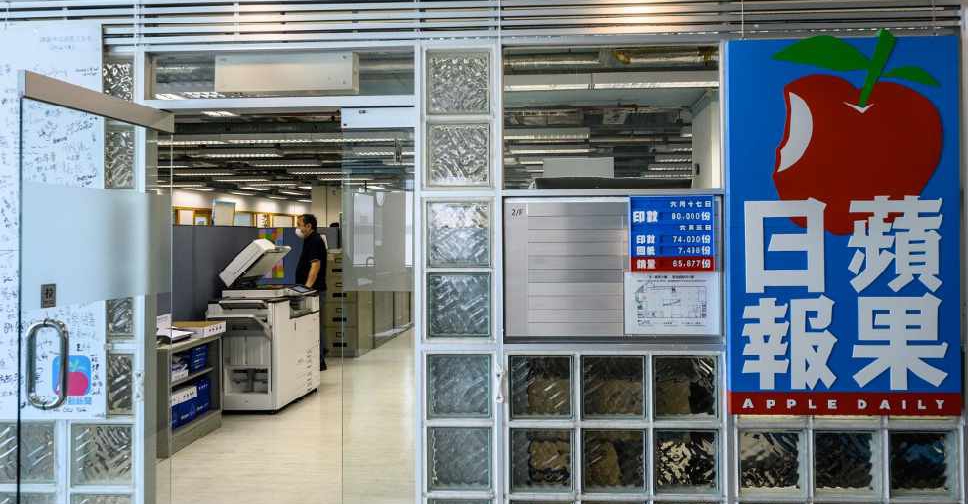 Hong Kong's pro-democracy tabloid Apple Daily will stop operating no later than Saturday, its publisher, Next Digital, said on Wednesday after national security police arrested another employee of the besieged newspaper.

The end of the popular 26-year-old tabloid, which mixes pro-democracy discourse with racy celebrity gossip and investigations of those in power, has escalated alarm over media freedom and other rights in the Chinese-ruled city.

In a statement on its website, Next Digital said the decision to close the newspaper, which employs about 600 journalists, was taken "due to the current circumstances prevailing in Hong Kong".

Cable TV and Now TV reported the paper's last edition may be published as soon as Thursday.

Police last week froze assets of companies linked to the newspaper and arrested five executives. On Wednesday, it arrested a columnist on suspicion of conspiring to collude with a foreign country or foreign forces.

Authorities have said dozens of Apple Daily pieces may have violated the security law, the first instance of authorities taking aim at media articles under the legislation.

Rights groups, media organisations and Western governments have criticised last week's raid of the Apple Daily newsroom by about 500 officers and seizure of journalistic materials on national security grounds.

A senior executive at Next Digital said a lead writer for editorials and a reporter had been arrested, without identifying them. It was unclear why the reporter was arrested.

Police, who typically do not disclose the names of those arrested, said one of the people they had detained was a 55-year-old man. A police representative said the department had no immediate information on a second arrest.

Apple Daily has come under increasing pressure since its tycoon owner and staunch Beijing critic, Jimmy Lai, was arrested last year under the contentious legislation. Lai, whose assets have also been frozen under the security law, is already serving a prison sentence for taking part in unauthorised assemblies.

On Monday, an adviser to Lai told Reuters Apple Daily would be forced to shut "in a matter of days."