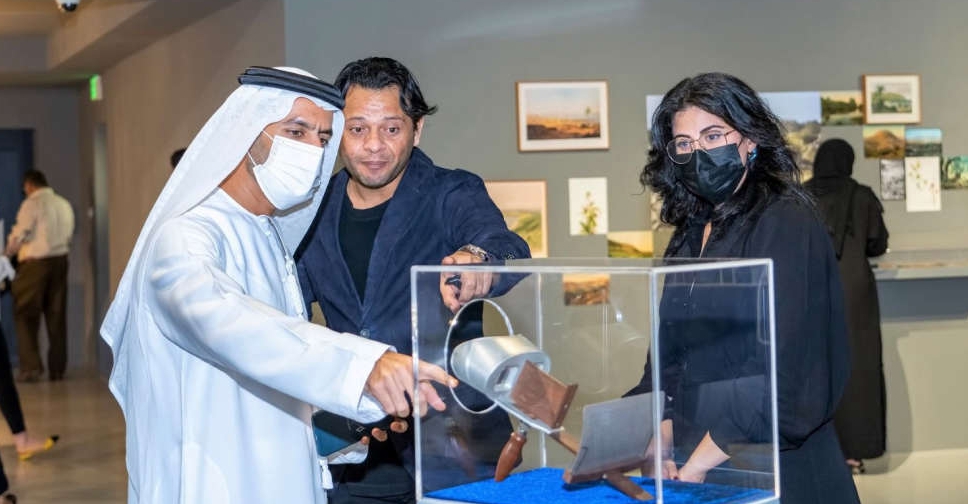 The Dubai-based artist attempts to capture the essence of the legacy of his home country, using archival materials including ancient maps, family photographs and paintings.

These are displayed in vitrines, lending it a distinct museological aesthetic.

Using collage-based techniques that incorporate photography and mixed media on a grand scale, the artist pieces together a temporary museum that showcases the fragmentariness of Palestine’s history.

The exhibition will run through February 10, 2022.

Over the past years, Harb had been collecting rare antique memorabilia related to Palestine on international online auctions, some dating as far back as to 1779.

Among his acquisitions are ancient maps of Palestine and Phoenicia, books of historical trade routes, family photographs and even artworks depicting the Holy Land by Orientalist painters such as David Roberts (1796 – 1864), a contemporary of J.M.W. Turner.

Placed in an installation-based exhibition setting, Hazem Harb invites the viewer to reflect on Palestine with the hope of establishing a permanent museum of his possessions for everybody to access in future.

Conceived as an immersive experience, the exhibition showcases enlarged historical black and white photographs of the Holy Land as backdrops for visitors to step inside, as if they are walking within three-dimensional remnants of a bygone era. Alongside these, existing works by Harb are placed in dialogue with a new large-scale installation made from olive oil containers, shining light on the importance of Palestine’s natural resources.

Touching upon themes like diaspora, the practice of archiving, and a nostalgic yearning for lost histories, this exhibition presents the artist’s deep reflection on his roots entrenched between the past, present and the future.

Commenting on the exhibition’s title, Temporary Museum, Hazem Harb said: "A museum is a place that holds objects intended to inform and spread knowledge about various subjects. A museum is also ever-changing, a space that constantly evolves. As I turned 40, I took this time to reflect on my career and the work produced throughout. I wanted to have a space to share all my findings - every book, map, photograph, and object that I have collected over the past few years. I immersed myself in extensive research since 2012. I wanted to freeze moments in time, showcasing all the evidence to celebrate a culture - a temporary story for a permanent history."

The exhibition is accompanied by a richly illustrated catalogue featuring an interview with the artist by exhibition curator Cima Azzam; an insightful essay by Laura Beaney, Director of Communications at Tabari Artspace; as well as an autobiographical account of Hazem Harb, written to mark his 40th birthday last year.

Maraya Art Centre has also released films on the artist and scheduled an engaging public programme comprising workshops, studio tours, and tours on the exhibition.